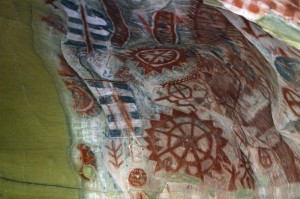 Some very notable Native American artists have existed throughout history. In 1877, Edmonia Lewis was commissioned by then American President Ulysses S. Grant to carve his portrait in 1877.  Prior to World War One, Angel DeCora was perhaps the most well-known creator of American Indian art. In addition to exhibiting paintings and illustrating books, she also taught art to young students. In the 1920s and 30s, the Kiowa Five or Six gained worldwide recognition for their painting. In the 1960s, performance art grew in popularity. In 2005, performance artist James Luna represented the National Museum of the American Indian at the art exhibition known as Venice Biennale. The event takes place only once every two years in Italy.